Swami Bhagavan Nityananda was renowned in the southern and western parts of India, and is regarded by many as one of the most important modern saints of the twentieth century. Rudi’s chance meeting with him in Ganeshpuri, India, transformed the course of Rudi’s inner work for the rest of his life. 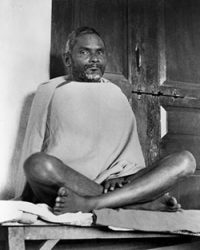 Back in 1960 Rudi was preparing to move to New Zealand at the instructions of his spiritual teacher back then, Pak Subuh. Although moving to distant lands was not exactly what he wanted to do, Rudi— not one to hesitate— began liquidating his business and huge art collection in preparation. He made a trip to India with the intent of disbanding his network of people there who had been assisting his business endeavors. While in Bombay he stayed with his friend, Beebee, a multimillionaire with a penchant for saint-hunting. Upon his arrival Beebee implored Rudi to go with him to visit his latest find— Bhagavan Nityananda— in Ganeshpuri, a small town carved out of the jungle some 2 1/2 hours away.

From John Mann’s book Before The Sun: Meeting Rudi  Rudi tells us: 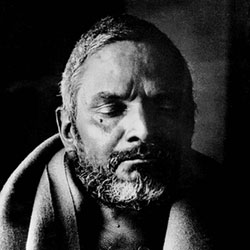 We left the car and walked to a plain building and then through a doorway that led to the large room where the saint held audience. The first impression was overwhelming. There were people crowded in every corner in a state of religious hysteria. In the front of the room sat a large, dark man in a semi-trance. I was completely repelled. What was I, a sophisticated westerner, doing in this weird scene? How could this utterly strange man have anything important to give me? He didn’t even seem to be aware of his physical surroundings. For one long moment, I was filled with the impulse to turn around and walk away. But I have learned not to trust my instinctive reactions. Instead, Beebee and I watched as people streamed by the saint, receiving a blessing or asking him a question.

A few minutes passed. Then, to my dismay, we were led to the front of the room. Before I could say anything, I found myself being presented to the holy man, who seemed completely indifferent to me. I was asked if I had a question. Only one thing occurred to me, so I told him I was planning to move to New Zealand shortly and asked if this was the right thing for me to do. I wasn’t sure why I asked since I already knew the answer… 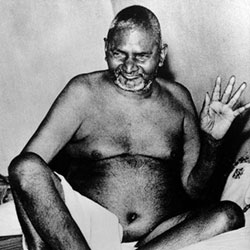 The saint’s response was unbelievable. “You are completely out of your mind,” he said. “Any decision that you make must be wrong. Go home!” I was deeply shocked. With one stroke, he had cut through the fabric of my whole life. I left the room in a daze.

On the way back to Bombay, Beebee asked me what I had thought of the experience. Before I could answer he told me that Nityananda was considered to be an incarnation of the elephant god, Ganesh. I asked him who Ganesh was, trying to cover my shocked condition.

Rudi soon realized the truth of Nityananda’s words, returning to New York to rebuild his business and life all over again. Rudi journeyed back to India the following year in hopes of visiting with him again, only to discover that Sri Nityananda had taken his mahasamadhi (the conscious act of passing where the body dies but the soul-force remains.) Shortly thereafter Rudi discovered that the experience of meeting Nityananda had had a tremendous effect on his inner life, taking a whole year to realize it. Nityananda’s energy and spiritual force was now moving through him in extraoridinary ways that would alter Rudi’s spiritual trajectory for the rest of his life.

Details about Bhagavan Nityananda’s birth are relatively unknown, but according to his disciples, Nityananda was found as an abandoned infant in Tuneri village, Kozhikode, India, by a woman named Uniamma Nair, who was married to Chathu Nair. Even in childhood, Nityananda seemed to be in an unusually advanced spiritual state, which gave rise to the belief that he was born enlightened. He was eventually given the name Nityananda, which means, “always in bliss”.


Settled in southern India, Nityananda gained a reputation for creating miracles and wonderful cures. He started building an ashram near Kanhangad, Kerala state. Many incredible stories abound, especially from Sri Nityananda’s early days, such as this one: The local police thought he must be producing counterfeit money to pay for the building pf his ashram, so Nityananda took them to a crocodile-infested pool in the jungle. He dived in and then produced handfuls of money, which was apparently enough to satisfy the police. 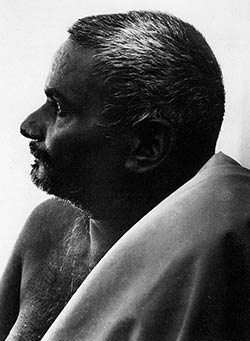 By 1923, Nityananda had wandered to the Tansa Valley in Maharashtra state. There, his reputation as a miracle worker attracted people from as far away as Mumbai, though he never took credit for any miracles. He said,“Everything that happens, happens automatically by the will of God.” Nityananda gave a great deal of help to the local adivasis (an aboriginal tribe of India), who were despised by the population at large back then. Nityananda set up a school, as well as providing food and clothing for them.

In 1936, he went to the Shiva temple in the village of Ganeshpuri and asked if he could stay there. The family that looked after the temple agreed and built a hut for him. As his visitors and followers increased, the hut expanded and became an ashram. To the people around him, he was an avadhuta: one who is absorbed in the transcendental state.


As a guru (teacher), Sri Nityananda gave relatively little by way of verbal teachings. Starting in the early 1920s, his devotees in Mangalore would sit with him in the evenings. Most of the time he was silent, though occasionally he would give teachings. A devotee named Tulsiamma wrote down some of his teachings and his answers to her specific queries. Later, these notes were compiled and published in the Kannada language and came to be known as the Chidaksha Geeta.

Bhagawan led an extremely simple life. He took his bath before dawn, and ate very little. Another person tied his langoti (loincloth), his only clothes, if it fell off, or fed him by hand. He was usually deeply immersed in divine consciousness, with his eyes closed and a beatific smile on his face. Mostly in silence, sometimes he answered an earnest seeker’s question with a few simple words which expounded deep truth. With knowledge of Hindi, English, Tamil, Telugu, Malayalam, Kannada and Marathi he guided seekers in different paths according to their capacity. He was beyond sleep. He never slept through the night and was wide awake during the day.


All devotees coming in his presence found peace and had a complete sense of satisfaction. Those who came in pilgrimage with sincere burning questions often found them spontaneously answered in their heart before they were even in his presence. Nityananda was an inexhaustible reservoir of love and compassion who had taken on a body to take his devotees towards the divine.

Nityananda had the power to transmit shaktipat (spiritual energy) to people. He could also be extremely fiery and intimidating in his behavior, even to the point of throwing rocks on occasion. This was his way of deterring people who were not serious in their spiritual aspirations, or who came to him with ulterior motives. 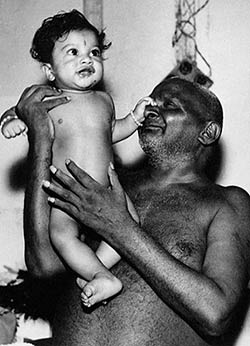 Bhagwan’s love for children was immense. Over a thousand children from nearby villages were given free morning meal everyday. Like one of them, Bhagwan used to play amongst the children giving them sweets, toys and clothes.


Sri Nityananda’s passing, the leaving of his physical form, unfolded over several months. His departure, which was a conscious one, was tearful and sad for Bhagawan, but not for the reasons one might suspect. It is reported that many, if not most, came to him window-shopping, seeking maya (illusion) — seeking the fulfillment of material desire — instead of the highest spiritual gifts that Nityananda had to offer. On the evening of August 7, 1961, sometime after midnight Nityananda was reported to have said:

Everyone comes here for money and only money. The more they are given, the more they seek; there is no end to their greed. When they come they are pedestrians sometimes without a proper dwelling place; and when they get the necessities, then comforts and luxuries are demanded: a car, a bungalow, and so on. When earlier prayers are granted in the hope that contentment would follow and that they would then seek higher values, another demand is placed in a never-ending series of wants and desires. Not much point in allowing this body to continue— hence samadhi tomorrow.


Previously Nityananda had spoken about how one should keep one’s mind:

It should be like a lotus leaf, which though in water, with its stem in the mud and the flower above, is yet untouched by both. Similarly the mind should be kept untainted by the mud of desires and the water of distractions, even though engaged in worldly activities. Then, just as the stalk, stem, and leaf, when properly cultivated and not disturbed, will culminate in the lotus blossom, similarly if the detached mind and faith in the Sadguru (God or his incarnation) are firmly established in the lotus of the heart, and never allowed to wax or wane with happiness and difficulties, his grace will be invoked.

There are various tests to which a devotee is subjected: they could be of the mind, of the intellect, of the body and so on. A number of such tests are there. In fact God is conducting tests all the time; every occurrence in life is a test. Every thought that crops up in the mind is in itself a test to see what one’s reaction will be. Hence one must be always alert and aloof, conducting oneself with a spirit of detachment, viewing everything as an opportunity afforded to gain experience, to improve oneself and go on to a higher stage. Desires are the only cause of sorrows in this world. Nothing is brought into this world and nothing can be taken. Everything that happens, happens automatically by the will of God.


While Bhagavan Nityananda is no longer with us incarnate, his spirit and energy is still available to anyone of sincere heart and the burning desire to have, above all else, a spiritual life.