Behind The Cosmic Curtain 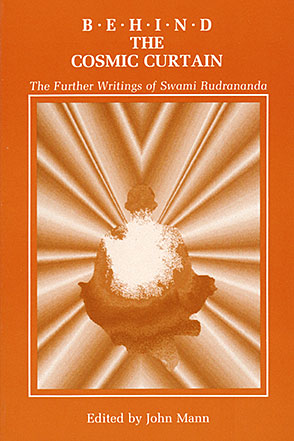 Behind The Cosmic Curtain

At the time of Rudi’s death in 1973, Swami Rudrananda’s first book, Spiritual Cannibalism, had just been published. There remained a pool of dictations and partially edited material that were, in the intervening eleven years, circulated among those evolved in preserving and developing his teaching. In Beyond The Cosmic Curtain, edited by John Mann, the book brings together much of Rudi’s unpublished material.

THE FURTHER WRITINGS OF SWAMI RUDRANANDA

Since it had not been previously organized by Rudi or anyone else, Mr. Mann had to put the manuscript together according to its intrinsic character, and make the necessary editorial corrections to bring it from a dictated to a publishable form. John Mann says:

Whatever the risks and difficulties in such an undertaking, the importance of making this material available to a wider audience justified the effort. It is my hope that Rudi would approve of the result. But whatever changes he might have wished, the spirit of his being speaks through his words as they come to life in the reader and generate a fiery awareness. And it is this which constitutes the essence of his action.

Beyond The Cosmic Curtain was first published in 1984, and was an instant hit with students and friends of Rudi. Through the generosity of the author the print version of the book is available:

The wish to grow necessitates the continual excavation of physical restrictions to extend the openness of a person to the ocean of creative force that flows through him. This flow only builds in a person through conscious service to others. It is doing, not through your will, but through surrender to God’s will or the will of your own higher creative energy, that allows you to recycle your energy so it can rise to a higher level. This recycling is essential in order to remove ego, which can limit your growth at the moment of its expression and become the limitation for others who are influenced by you.

The consciousness required for a person to undertake his own development, and the growth of others at the same time, is complex. It is impossible to stay on your own level and teach another person on a lower level. It is also impossible to reach someone else’s level and teach them there. It is only possible to do both acts simultaneously. It is for the teacher to raise himself to his highest level and connect with the student on their level, transcending and feeding the student until the level of consciousness of the teacher is reached by the student. The effort on the teacher’s part is great, but the student must be willing to surrender in order to allow the process to occur.

You have to constantly relate everything you do to the basic question of what you really want in your life. The essential nature of a human being is that he can make conscious choices. It is only when such decisions help to establish the flow of higher energy in the body that they represent an approach to freedom. A man has to fuel his mechanism. He has to open his system and feel energy coming in from the cosmos. This is how he grows.

A day for me is like a hundred years. It holds so much richness. When you become one with yourself, you have enough inside to become one with someone else. In your ability to expand your energy, you begin to share with all that’s around you. You should be in the midst of a symphony of energy. Look at the colors. Feel the force that’s being given off. It’s yours to reach into, yours to share. People are afraid to expose themselves to life. But life begets life and love brings love. All that people require is love.