Renovation of the Big Indian Stupa 2015

Back in the 80’s one of the first stupas in the northern western hemisphere was built in Big Indian, NY, under the design and construction of Ra Baker (now known as Silver Ra) and led by back then Stuart Perrin & John Mann. The construction and  development involved many individuals and communities from around the country who volunteered their time, love and energies to bring this project to fruition. After many years of aging and deterioration the stupa is now moving into a remarkable new phase of restoration and revitalization under the guidance of Silver Ra and the support of Lama Rangbar.

In late summer of 2015 Silver Ra and seven intrepid volunteers arrived from Denton, TX, to begin renovation work on the Big Indian stupa in upstate NY. They came to install a newly-built niche ornament  for what is now called the Stupa of Intrinsic Transformation at the site of Rudi’s old ashram in the Catskill Mountains. 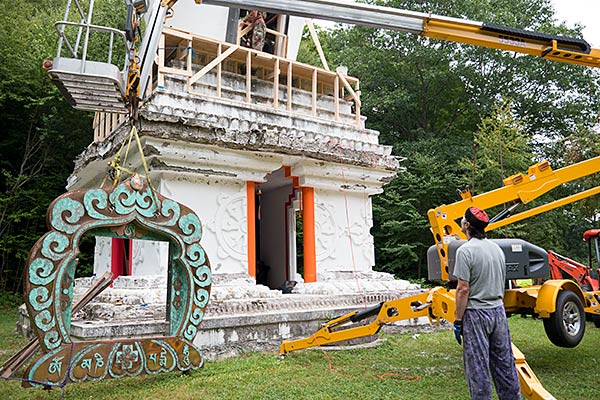 Over several years Silver Ra has made the concerted effort, now with the installation of the new niche, to bring attention to many worldwide communities for the need to undertake renovation before it is too late.

While in Big Indian Silver Ra said: “The reason to be in Big Indian is to inaugurate or jump-start the renovation for the stupa. To do that we decided to complete a part of the stupa that was never completed which was a niche ornament around the Rudi statue. The restoration began because some of the concrete was of poor quality, and it has slowly deteriorated.”

“I chose to step back into the circle,” Silver Ra said, “because I feel there is a whole new generation of people now coming to this stupa. There are new people being drawn to this land.” Plus it was the perfect time because in a few years it will be too late to do the needed restoration.

“People need to see things getting done rather than hear about them or talk about them. This niche install was to show people that things are really happening. This is so beautiful that it will really open people up and say ‘Wow! this is amazing, I want to be a part of this. I want to contribute in some way.’” There are many ways to participate, he says, whether physically or on a monetary basis. Even in prayer to support the project. 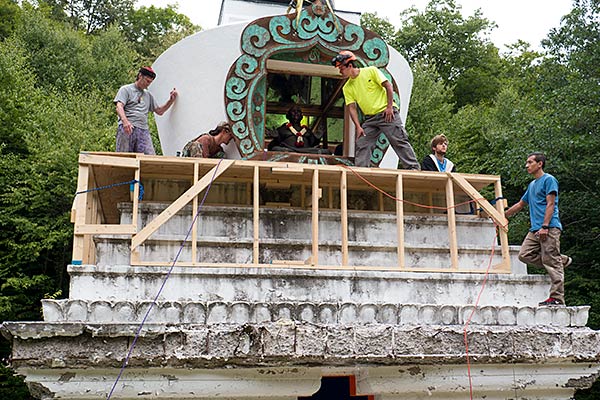 Of the stupa itself, Silver Ra said: “The stupa is actually radiating out energy. It’s a presence, and it’s very strong. When you approach it you feel a sense of awe, which is a connection to the divine principle. It’s an energy generator that’s there for people to actually experience and use. And if they are willing to connect — set traditions aside, set protocol and dogma aside just to connect to the energy — then there is a presence there that will help them with their lives.”

Silver Ra invites everyone to come and visit Big Indian and see for themselves. “I think if they step into the space of it they would experience something quite remarkable, and be truly inspired to get involved.”

ABOUT THE STUPA
& WHY THE RESTORATION IS IMPORTANT