Big Indian Turned Over To Bodhivastu

In the spring of 2014, a new and exciting chapter began for Big Indian as the custodianship of part of the land was turned over to Bodhivastu Foundation and it’s President and founder, Lama Rangbar Nyimai Özer, a Mantra lineage holder trained in the Vajrayana Buddhist tradition over the past 30 years according to the ancient tradition of Padmasambhava. Recognized by Tsewang Ngodrup Rinpoche as the reincarnation of Tulku Chimed Yugyal, the ritual meditation master of Rangnang Ogmin Ling Dzogchen Monastery in Kham, Tibet, he exemplifies the transfer of Eastern Wisdom to Western mind.

On the Summer Solstice of 2018, John Mann & Lama Rangbar announced that the rest of the Big Indian property will be turned over to Bodhivastu Foundation. Their formal announcement reads:

In celebration of the unfolding of past aspirations of many great beings into the present moment, we are happy to announce that Big Indian will continue towards the fulfillment of its arising as a highly blessed Meditation and Spiritual Retreat Sanctuary. Dr. John Mann and Lama Rangbar have come to a harmonious agreement whereby the remaining portion of the Big Indian Ashram property will henceforth be owned and managed by the Bodhivastu Foundation for Enlightened Activity. Further development of the land in its entirety will continue going forward along with all the normal center’s activities.

We encourage you all to continue to enjoy the property for your spiritual development and contribute to its growth and fulfillment by attending and supporting its activities in whatever ways you deem possible.

With appreciation for the energy, time and support that you may have given Big Indian in the past:
And a growing sense of anticipation and excitement for what the future may bring,

Lama Rangbar and Bodhivastu have made tremendous progress in taking responsibility for making it their home. This includes swift renovation of the meditation hall, blessing ceremonies, puja ceremonies, and most recently welcoming His Holiness Yangsi Dudjom Pema Shepa Rinpoche who has named the land Trinlay Kachod Ling. Visit the Bodhivastu Big Indian page for more details and latest news: 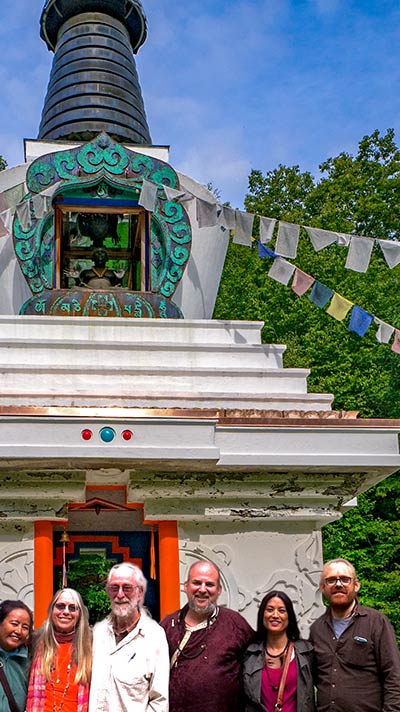